Yeah, it is finally here!! One of my favorite naughty authors has been working on making one of her novellas into an audiobook!!! I was living vicariously through her with this project, as she asked my advice on narrators. I am one of the few audio-bibliophiles she knows, which makes me a pseudo expert! I promise not to let that go to my head, much!

It was such hard work listening to all those smexy male voices. Yummy gravely growls and deep baritones. Sigh, it was such a chore! In the end she picked a delicious narrator who really brings the story to life, while setting panties on fire!! 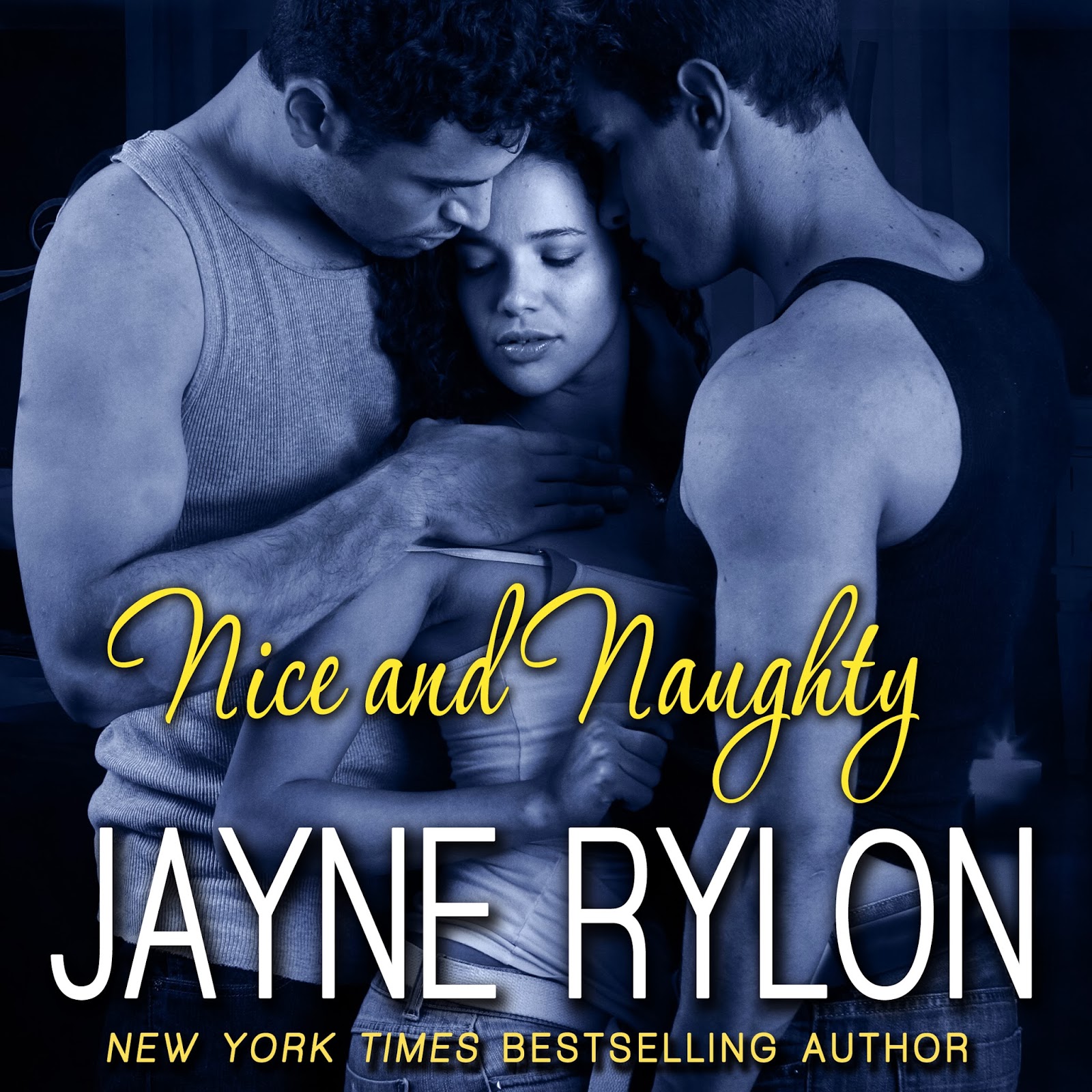 BLURB
A thrill seeker at heart, Alexa Jones has learned to contain her adrenaline rushes to intense boardroom negotiations after a disastrous lesson in heartache. But when she cracks, and indulges in a high-octane encounter on the hood of her sports car, she becomes involved in more than a simple affair. Can one man
appease Alexa’s nice and naughty sides?

Justin Winston got more than he bargained for on his refreshing summer drive, but now he’s entangled the woman of his dreams in a web of murder and corporate espionage. That’s not the way to convince her scarred heart to trust him. He needs assistance from someone practical, controlled… safe. Luckily, he knows just the man to call on for help.

Or will it take two?

Nice and Naughty by Jayne Rylon
My rating: 5 of 5 stars

What a yummy fun read!! It kicks things of fairly quickly, wicked little roadside steam!!! This is a very smexy read, loads of steam and variety packed into this short read. I love a hot twin menage!! Oh girl, forget the panties cause you will just have to change them later!

Even though the feeling develop quickly I am willing to let it slide, sometimes lust feels like love. And hey this is fantasy, ain't nobody got time to build a relationship!! Still, I felt the liking and the connection between the three.

The story is very well written and fast paced. The side mystery is interesting without being overly complicated. For such a quick story I was really drawn in, I even had a sniffle/tearing up moment at the end.

I listened to the audiobook and it was a real treat!! Hello smexy voice, Gregory Salinas can read to me anytime!! Seriously call me up and read the phonebook!! He has a delicious growl to his voice that makes a girl swoon. Warning - Do not listen to this at work, you will not be able to concentrate on simple tasks and stout balding co-workers will suddenly look appealing. All the result of one smexy voice and some wickedly hot detailed steam!! He reads with such energy and enthusiasm, that a girl has to pause or embarrass herself in public!!

I can only hope Ms Rylon puts more of her books on audio using this delicious narrator who gives multiple eargasms!!

View all my reviews

“Jayne Rylon’s story is absolute perfection. The intense emotions and evocative imagery captivate the reader. There is so much to appreciate in this novel and it is not over done. this is the way a hot and steamy romance should be written. I definitely can not wait for more from this absolutely phenomenal author.” 5 Stars, Ecataromance

“Jayne Rylon’s NICE AND NAUGHTY captured my attention from the moment I opened this book… NICE AND NAUGHTY is a definite must read for those of you who enjoy menage-a-trois romances.” 5 Ribbons, Romance Junkies

“Superbly written, powerfully packed with tender emotions, sizzling red hot sex and a little supsense to liven things up, Nice and Naughty is a wonderful story for anone looking for a high voltage naughty fun.” 5 hearts, The Romance Studio

“Alexa, Jason, and Justin are well-drawn characters for a story this short with the two brothers actually having deeper traits that go beyond the superficial “carefree twin/proper twin” stereotype.” 73, Mrs. Giggles

Praise from author Laura Stamps, “I had also never read anything by Jayne Rylon, who wrote the third novella. All I can say is WOW! She totally blew me away. Her story about two very opposite twin brothers and the woman who completed them made this anthology 4 stars. No kidding. It was incredibly well-written, fast-paced, smokin’ hot, and engaging. I just loved it, and I will definitely look for more novels and novellas by Rylon. She rocks!”

“Nice and Naughty is an enthralling story that gets one of my highest recommendations. Once again, I have read a book cover to cover twice shortly after getting it… Jayne’s fantastic story will entice and tantalize you while leaving you emotionally wrung out and extremely satisfied. You don’t want to miss this, but be prepared with a hunk or two of your own and lots of ice!!!” Sandie, Samhain Cafe

Sign up to receive my monthly newsletter for contests, exclusive excerpts, release info and more.

a Rafflecopter giveaway
at 1:44 PM