Spotlight & Giveaway - Lunacy and the Vampire by Evie Jayne 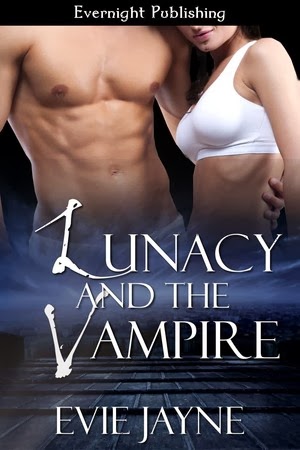 Every myth you've ever heard is true. Monsters do exist.Luna Sea Rakshasa inhabits The Dominion, a realm of immortals hidden within the world of humans. She is a Beanne Sidhe huntress, a killer of dark and dangerous things, but she harbors a secret that has been tearing her apart for nearly two thousand years. On the cusp of finally facing the demon vampire who sired her, the last thing she needs is an obsessed vampire who stirs things she would rather not feel.Aveon Ap Conwy was human before he was found dying on a battlefield and turned into a vampire. For a century he has been tormented by the personal war to keep his humanity. Nothing has been stronger until the night he meets Luna. She arouses his deepest hungers, but Aveon knows he must resist his urge to take her...because if he tastes one drop of her blood, they will both be lost.Thrown together in an unwelcome alliance and fighting the heat that simmers between them, they travel to the mythical domain of Luna's demon sire. As their worlds merge, Luna and Aveon become bound by something stronger than lust. Can Luna lay aside centuries of prejudice and open her heart to the only man who can stand beside her in the battle with the vampire king?
Excerpt:

a Rafflecopter giveaway
at 12:00 AM