Spotlight & Giveaway - WHAT NOT TO BARE by Megan Frampton 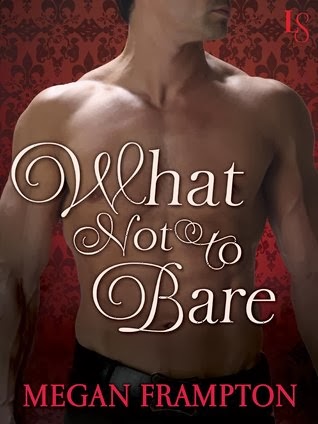 WHAT NOT TO BARE:
A Loveswept Historical Romance
By Megan Frampton
On sale October 14, 2013
ISBN: 978-0-345-54173-4
Published by Loveswept
Blurb
In Megan Frampton’s witty historical romance, a woman is judged by her gown, and a man by his reputation—until both are shed in one sexy moment of seduction.
Lady Charlotte Jepstow certainly knows how to make an impression—a terrible one. Each one of her ball gowns is more ostentatiously ugly than the one before. Even she has been forced to wonder: Is she unmarried because of her abysmal wardrobe, or does she wear clashing clothing because she doesn’t want to be pursued in the first place? But when Charlotte meets Lord David Marchston, suddenly a little courtship doesn’t sound so bad after all.
David will be the first to admit he’s made some mistakes. But when he gets yanked from his post by his superiors, he is ordered to do the unthinkable to win back his position: woo his commander’s niece. If David wants his life back, he must use his skills as a negotiator to persuade society that Charlotte is a woman worth pursuing, despite her rather unusual “flair” for color. But David does such a terrific job that he develops an unexpected problem, one that violates both his rakish mentality and his marching orders: He’s starting to fall in love. 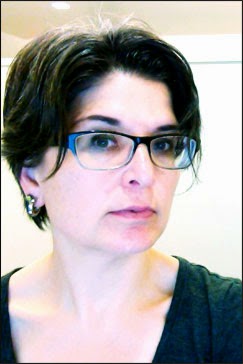 Megan Frampton majored in English literature at Barnard College, with a double minor in political science and religion. She worked in the music industry for fifteen years, editing and writing music reviews for a music-industry trade magazine and eventually becoming the editor in chief. Frampton married one of her former interns and lives in Brooklyn, New York, with him and her son. When she isn’t writing, she serves as the community manager for the romance novel website Heroes and Heartbreakers.
Connect with Megan: Facebook | Twitter | Website 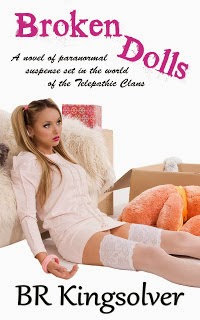 
Private investigator RB Kendrick makes her living nailing cheating spouses, digging up other dirt to help in a divorce, finding long-lost relatives, and occasionally sniffing out criminal activity and fraud.


When she takes a job to find a missing girl, she has no idea she is headed for the most dangerous case of her career. Usually, her ability to read minds gives her an edge. But when the people she’s hunting are also telepaths, that advantage is limited.


The search takes her into the dark underbelly of telepathic society, where anything, and anyone, is for sale. She discovers that telepathic women and girls are being trafficked as the ultimate sex slaves.


With people trying to kill her, she’s on the run, not knowing who she can trust. Will she find the missing girl, or become a victim herself?


I made silver and turquoise jewelry for almost a decade, ended up in nursing school, then took a master’s in business. Along the way I worked in construction, as a newspaper editor, a teacher, and somehow found a career working with computers.I love the outdoors, especially the Rocky Mountains. I’ve skied since high school, with one broken leg and one torn ACL to show for it. I’ve hiked and camped all my life. I love to travel. I’ve seen a lot of Russia and Mexico, not enough of England. Amsterdam is amazing, and the Romanian Alps are breathtaking. I was in Paris and Iceland this summer.
I have a very significant other, two cats and two Basset Hounds. I’m currently living in Baltimore, nine blocks from the harbor, but still own a home in New Mexico. 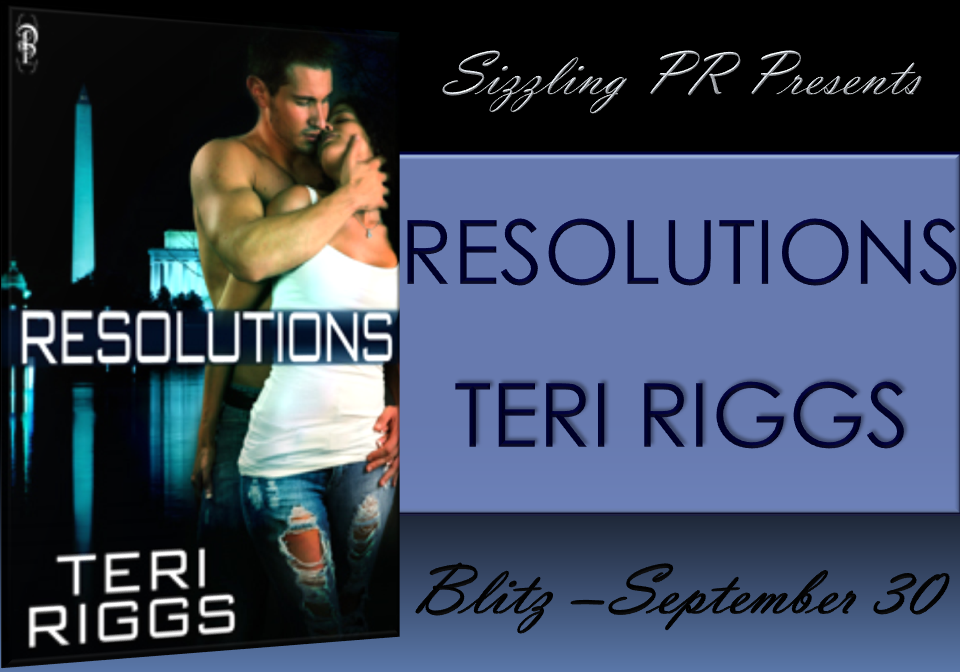 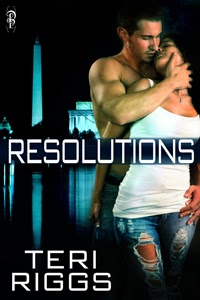 DEA agent Eve Taylor has had her fill of alpha males. When Resolutions’ operative and former lover, Dillon “Mac” McKenna, threatened her hard-earned independence, she ran. On a mission to gather evidence against a Colombian drug-lord, Eve discovers the drug-lord is helping terrorists plan an attack on American soil. Before she can escape with the vital information, she’s captured and comes face to face with her mortality…As a teen, Mac watched his family fall apart after his mother died doing dangerous U.N. work. The possibility of losing Eve to a mission ignited an overwhelming need to protect her. When he forced her to choose him or her job, she walked away. Two years later, it seems all his nightmares have come true and he’s tasked with rescuing her from a Colombian prison. Mac has never stopped loving Eve, but does he dare risk his heart when he’s so terrified of losing…On the run, Mac and Eve must learn to trust each other again in order to stay alive.


Excerpt:
Beefy hands wrenched Eve awake from a fevered sleep, pulled her from the cell, and shoved her into a musty-smelling hallway. I’m being moved? A guard pushed her with one hand, keeping a tight grip on an AK-47 rifle with his other.
Her shoulder throbbed in perfect cadence with the pains shooting through her broken wrist, and she had one badass headache from being punched in the face a few too many times. Using her good hand, she walked fingers across one cheek, then the other. The right side was totally numb. Her eye had swollen shut, and she couldn’t see a damn thing out of it. She ran her tongue across her teeth and tasted the tart, copper flavor of blood. Three teeth loose. Well, at least they’re still in place.
In spite of the relentless pain, she stayed determined to survive whatever Mendoza dished out. She wasn’t a quitter. No, sir. Duncan Falls, Iowa didn’t grow quitters. Eve ignored the constant ache in her ribs, courtesy of a guard’s overzealous kick, and took in a deep breath. She willed herself to stay alert, to keep pushing. Escape. Third times the charm.
Eve slapped the guard’s dirty hand. “Hey, Pedro, stop being so damned pushy. Where we going anyway? We got a hot date I’ve forgotten about?”
He looked puzzled then shoved her again.
“Don’t understand English, do you, Diego? Bet you understand this.” Eve drove her elbow into the guard’s face. Thick rubbery cartilage gave, and she whooped triumphantly.
Blood squirted from his nose and he screamed.
Eve stepped back. “Yep, I’m pretty sure you understand that.”
Unable to grab the guard’s assault rifle, she clutched her injured shoulder, and took off in a slow jog, no longer able to push any harder.
Her escape was short lived.

Visit Teri Riggs at www.teri-riggs.com
at 12:00 AM No comments:

Blurb:Who said tempting a sweet Southern belle would be easy?

When rebel biker Bullworth Clayton gets tangled up with pastel-and-pearls-clad April Church, sparks fly. Sure, April would clearly rather work with anyone else, but if teaming up with Bull means a successful charity event for a sick little boy they both care about, then so be it.
April is baffled at how drawn she is to the leather-wearing, tattooed Bull—he just doesn’t fit with her simple, safe, country-club life. And as much as the handsomely rugged man tempts her, she still can’t shake the images of the tragic motorcycle accident from her past, which left her scarred and her father broken.
Bull tempts her to don a pair of leather pants and go for a ride with him, while April desperately tries to resist her attraction to the wild side and keep her exploits hidden from her small town. Will they be able to navigate their differences and find a middle road to love?

Vicki is a native of the Charleston, South Carolina, Lowcountry and loves to share her enchantment with the area with readers through her writing. Even in childhood, she enjoyed penning stories and poems—no doubt fueled by her grandfather's enthusiasm for telling tales himself. Where else—but in the South—could one find the interesting blend of salt water, eerie swamps, unwritten traditions and unique characters? In her spare time, she loves traveling, spending weekends at her family's lake house, playing golf and cooking (with lots of wine). Visit Vicki at http://www.vickiwilkerson.com . David Cameron has been tricked. After bringing his supposedly ailing mother to Brighton to take the waters, he’s found himself bombarded with young ladies of marriageable age, while his mother has made a marked improvement. Seeking respite from the hordes, he retreats to a beach he hasn’t seen in years--and finds a woman he’s never quite been able to forget.Caroline Tolbertson just wants to be left alone. But her mother is determined to see her married off, no matter Caroline’s protests--or her embarassing lack of suitors. Seeing David Cameron, her childhood crush, again sets her heart racing, but she’s older and wiser now. And no, that wasn’t her heart sinking when David suggested a faux courtship instead of the real thing.But Caroline has never been very good at following the rules, and the fake attraction soon grows into the real thing. Now Caroline has more scandalous pursuits in mind and David is finding it very hard to say no to his gorgeous friend. Will giving in to temptation send them both down a path they each claim to abhor--straight to the altar?
Buy Links:   Amazon, Barnes and Noble, Books-a-Million, and Indie-bound

Author Info
A veterinarian and infectious disease researcher by training, Jennifer McQuiston has always preferred reading romance to scientific textbooks. She resides in Atlanta, Georgia with her husband, their two girls, and an odd assortment of pets, including the pony she promised her children if mommy ever got a book deal. Jennifer can be reached via her website at www.jenmcquiston.com or followed on Twitter @jenmcqwrites.
Author Links
https://twitter.com/jenmcqwrites
http://www.jenmcquiston.com/
https://www.facebook.com/jennifermcquistonauthor

a Rafflecopter giveaway
at 1:00 AM 6 comments: 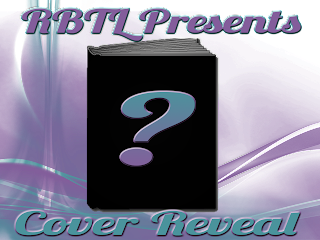 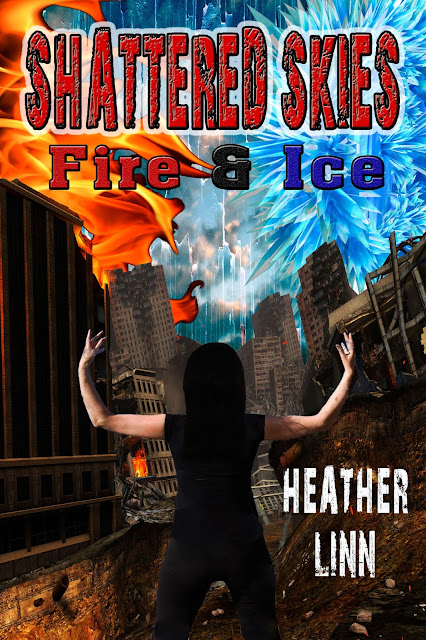 Title: Shattered Skies: Fire & Ice
Author: Heather Linn
Series: Shattered Skies Saga (#3)
Genre: SciFi/Horror
Publisher: Self Published
Release Date: Estimated Oct 31 2013
Blurb/Synopsis:
Catalina is forced to fight off her demons alone. There is nothing that Akia can do to help her now. Day by day she is transforming from human to a power that nothing in the universe has ever seen. Her new power brings with it a lot of enemies. Ever race walking the planet wants to get their hands on her for one reason or another.  Confused, she doesn’t know who to trust. Then again it is hard to choose good or evil when you don’t know what side you’re. 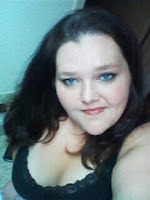 I am a mother to three beautiful children, they keep me busy. I live in a small town that’s filled with monsters and really nice people alike. I love taking walks around the mountain trails where I live and I love taking trips to the Ocean, especially the South Carolina beaches. The ocean brings me tranquility and refreshes me, but I don’t get to go there often enough. Some mornings I listen to nothing but sad country songs for hours but when I write, I usually buckle down with my headphones and listen to something raw and angry like  Seether,  and Stone Sour.     I can be shy around people but I’m mostly always honest within myself. In many ways, on many levels, I express different parts of myself through my characters. Someone told me once that you are only as old as you feel  and I love that! In fact, I love that idea because personally, have no intentions of ever growing up!  I want to be 18 forever no matter what they do to me. LOL!